Cutting for inlets and PSU compartment

The measurements for the inlet cut outs are shown in the diagram. The XLR socket is fairly standard but IEC sockets can vary so while these are a guide, do check the measurements of the actual socket you have.

The XLR inlet was cut with a 21mm hole saw, running it gently so as not to tear the wood as it came out the other side. The XLR socket I used had three location lugs which required a small amount of rasping of the wood to cut three notches, shown in the picture, but the one you use may not.

The rectangular hole for the IEC socket was marked out on the box first, then four 10mm holes drilled close to the inside corners of the shape, without crossing the lines, to give access to a jigsaw blade, used to cut the final rectangle out. From the pictures you can see I wasn't perfect at that final task but the flange on the socket covers up small mistakes like that.

Finally, both sockets were fitted in their cut outs, small pilot holes drilled for screws in the locating holes and the sockets fixed in place with screws. 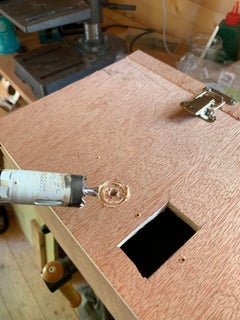 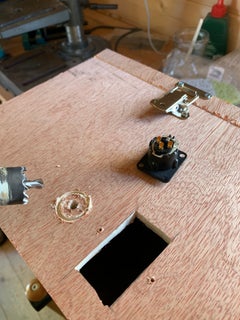 The mains PSU will be located as shown in the picture, and a box placed round it for safety and to prevent loose components interfering with its operation.

The plywood layout for the box is shown, a lid and a side piece, together with three small strips of wood to help fix the lid and side in place. 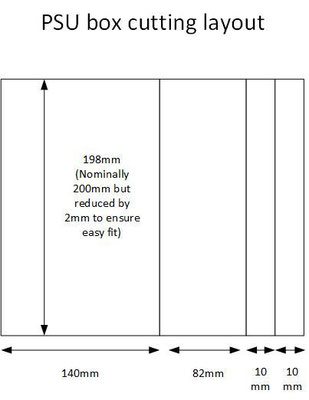 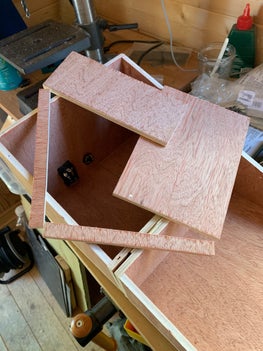 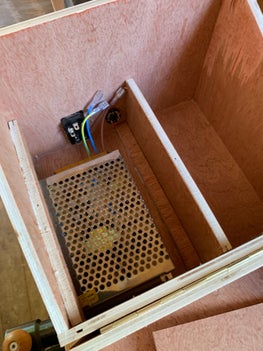 One strip of wood is glued to the side of the box so that its top edge is 82mm above the base its whole length.

One strip of wood is glued to the base so that its edge is 140mm across the base.

For both these strips its a useful idea to draw a line across the box with a sharp pencil using the box edge and box lid as guides.

Finally, glue the last strip to the long edge of the edge piece. This will be used to screw the lid to afterwards.

If you don't have clamps then the strips will have to be fitted one at a time and the box placed on its side while the glue sets.

I have considered fitting a fan to the PSU box and will do so if heat proves to be a problem. 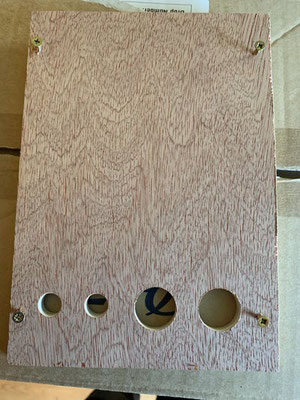 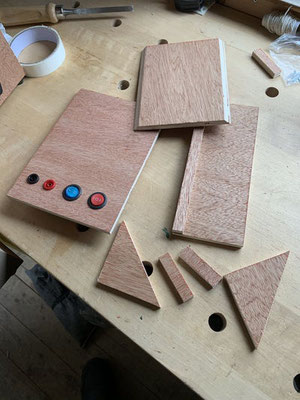 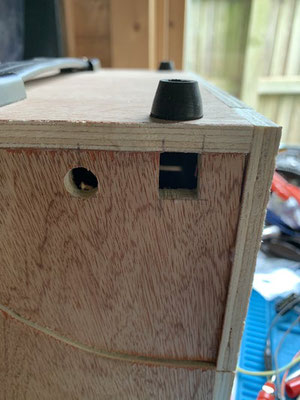 The lid of the PSU was cut out as per the picture, the banana sockets and switches added afterwards to test size. The other panels in the picture are for making the console part of the box in the lid so if you aren't going any further won't be needed. The two small rectangles of wood were used to brace the PSU box when it was glued in place, as per the picture of the PSU internal side wall.

The intention is to put the console into the lid, driven by an Arduino Mega. As this project will be in a state of flux for months to come, I've cut a hole in the side of the box lid to enable the Arduino to be programmed without having to de-install it. The two triangular pieces of wood support the console panel at a 45 degree angle, and one of them is cut out to accommodate the Arduino board fitting against the case.

The console front is 230mm by 127mm and is cut at the edges to 45 degrees to fit neatly to the box. I did this on my band saw but a power sander or plane could be used with frequent measurements of the angle when cutting..