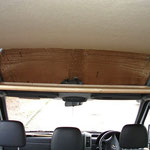 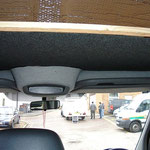 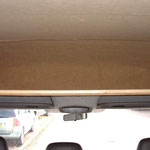 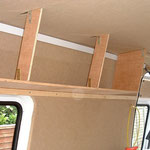 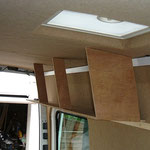 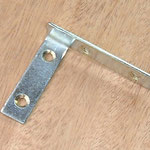 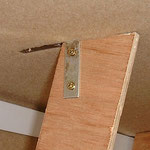 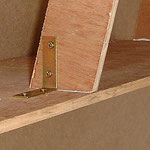 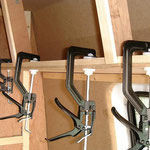 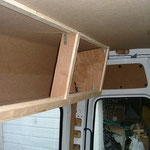 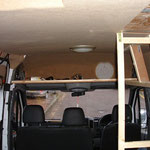 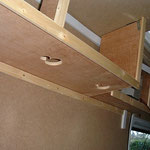 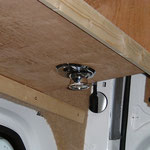 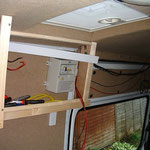 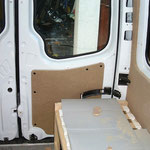 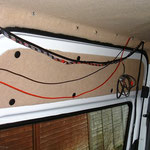 Lots of tidying up after the carpeting. New overcab shelf made for base of cupboard. Lots of time wasted trying to build a liner for it only to find that it was almost impossible to fit due to a tiny amount of batten to fix it to. Ended up just fixing it in place after Liz covered it with a grey cloth to blend in with the cab. Cut the old headlining to fit so we're back with an enclosed cab, and much quieter. Liz carpeted out the cupboard in the week to match the rest of the van.

Liz started making the lockers for the sides. Had to make up brackets to fit as there wasn't anything to buy that would do the job. Also lots of fun trying to match the angles of the roof with that of the lockers. Lots of work to do here, as everything has to be fixed and glued and there are a lot of parts!

Intense Easter weekend started. Mostly fitting out the lockers, running wires etc. Started out by starting the assembly of the second bed frame. Just like the first, absolute pain to get right and was abandoned awaiting some long aluminium brackets. Fitted the mains breaker switches, boxed in the mains wires and ran the overhead light wires. Liz continued with the locker fitting which was a lot of pain due to having to plane bits of ply off here an there, but it does mean that the facing fits nicely. Also lots of fun making the batten to fix the locker hinges to as this has to be angled at 15-16 degrees to the roof to fit the locker front. Running two metre lengths of wood through the table saw set at an angle worked, but was a two person job to get it through.But the angle is perfect so will look good and the lockers will close perfectly.

Fitted the first of the spot lights after several tries at getting the holes right on scrap ply, again, effort was worth it, but what are we going to put on the locker base?

Liz ended up the day making a mockup of the locker door to see how the cladding will fit, looked good!