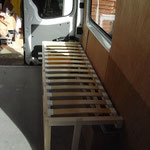 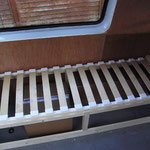 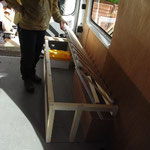 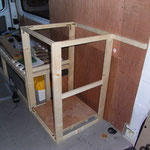 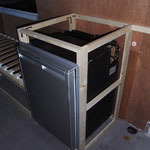 Started out the day with me finishing off the bed and Liz cutting up wood for the kitchen frame. We also tried to put up the sliding door panel that Liz had covered during the week, but the standard size trim clips, 20mm long, were just to short with the van carpet on so will have to look for better ones. The slats were from Ikea and Liz had cut them to the right length during the week but the frame for them wasn't straight so had to be reassembled before finishing. But it took both Liz and my weight so I think it was a success! Lots of fun with the kitchen frame trying to get it straight and against the wall and to fit the refrigerator despite all the measurements.... but we got there, having used a bit more space than expected. Tomorrow the cooker.