We had a few long thinks about this, mostly around how big and which sort. From our caravanning days we had always had a largish fridge, 90-120L, and running on gas, 12V or 240V. This worked fine, but on gas in the summer went through a bottle as fast as the heater did in winter. On 240V was very good, but then needed hookup which we rarely had. 12V was a pain when hooked up to a car, wasn't reliable, and if not, then flattened the battery with the large current it drew.

As we were building our own van, a three way fridge would mean cutting big holes in the side and getting it level on a van with curving sides, we weren't keen. Then we also tried to work out where it could go and found that with the way we wanted the van layout the outlets would be behind the open sliding door. Decision made then, we were going to have a compressor fridge, with just a 12v supply, no holes in the side.

Thought a bit about the size, and with the space under the kitchen counter, and the space we had elsewhere, went for a 110L fridge, which would use up most of the space, has a gap for ventilation underneath, and space for a cultery drawer at the top, which would also serve as an air vent.

The model we fitted was a Waeco CR110, which works very well, more on this in the electrics section though. It was worth shopping around for it, as the recommended price which Dometic charge is huge. To avoid this, we've heard of other builders who bought a standard domestic fridge and an invertor, wired them together, the fridge thermostat switching the invertor power and running that for a quarter of the price. Domestic fridges won't be as robust, but the money saved will buy several new ones!

In the section on IoT, at the top of the page, there's a piece on changing the fridge electrics and also providing for a mains domestic fridge.

The fridge was to go under the worktop and the layout had been planned to put it at the rear end with the door hinge on the left, so that anyone working in the kitchen could access it easily. Thinking we were playing safe, we also bought Waeco's frame for fitting, which screws into the sides and top of the fridge and then the fridge frame screws into the kitchen frame from the front. The fridge has a facility to screw in to the frame from the inside, via popout hole covers, but these proved impossible to remove when I thought I'd test them out.

The picture shows what it looks like in place. But in the confines of the van, this proved a problem, as it robbed the gangway of 5cm, which is suddenly a lot, and also meant that the fridge door didn't open fully. Que an alternative mount. Stupidly we just went out and bought Waeco's flush mounting kit, thinking we would recoup some of the cost selling the other frame. The flush mount kit was too wide, and noone else was going to make the mistake of buying a frame for a fridge.

The solution was to ask the local metalwork shop to make one, which cost very little, a tenth of the cost of the frames. Job done.

We had read the Waeco manual showing the air flow round the fridge so thought things would run fine. The fridge has a fan built into the fins at the rear to help air flow as well but things weren't running well.

The fridge got cold, but was running for extended times, all of which pulled on the battery when not driving or on mains hookup. We checked the specification and it just seemed that it wasn't getting the ventilation it needed to run efficiently. Also if it switched on in the night it was a real disturbance and the fan was no lullaby. 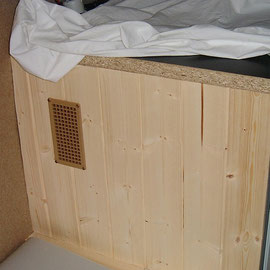 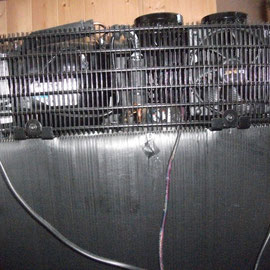 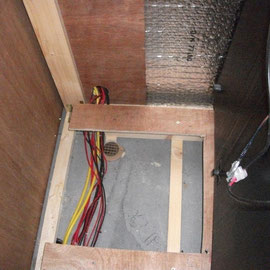 First attempt at a solution was to fit an extra ventilation hole in the side of the fridge enclosure, and to buy a quiet running PC fan. The fan was definitely an improvement on the noise, but there was little change in the efficiency. Along with this we tried a couple of fans to blow air out into the van switched with a thermostat, but it didn't prove reliable.

Next attempt at more ventilation was to cut a hole in the floor of the van beneath the fridge. This was one of the few places this hadn't already been done for gas or general ventilation so had to be an improvement. It was a bit, but proved to be a pain to do and the results were disappointing.

As the problem appeared to be getting air over the rear fins and away, we then went for more computer fans and mounted these over the top of the fins, sucking air from the top and blowing towards the front of the fridge and into the van. Whether this was really an improvement is difficult to gauge, but when running, the heat coming out meant that it was obviously better than before. We actually had two tries at this, once with cheap fans, and once with more expensive. Putting more fans in did increase the noise though, but with a shorter running time. 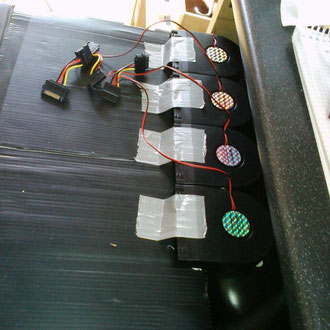 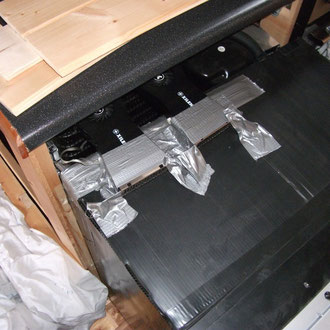 A final solution was needed instead of just nibbling at the edges. We decided to force ventilate the fridge. Investigations were made on domestic kitchen ducting, motorhome side, floor and roof vents, ventilation fans and even boat bilge blowers. The solution in the end, was to design and make our own air ducts to run behind the fridge. These were formed from upholstery foam rubber which would deform and seal against the fridge when in place, and guided air from two holes cut into the floor. A wooden duct was made to guide the air from the holes, and support two fans, one to suck air into the duct from the outside, and one to blow air from the duct out of the van. The existing fan in the rear fins was retained, but a duct was arranged to force air from one side of the fridge to the other so that maximum cooling was achieved.

This actually works very well and is very quiet. Phew!

When the fridge was first moved out and the platform on which it had been standing on removed (since it was first installed), there was a bit of a mess of tangled wires whose state wasn't previously visible, and a badly fitted hole, the platform support having been sawn through when the hole was made.

The two new hole vents were checked for position, before being marked out and then the holes drilled. As one hole was cutting across the old hole, there was a lot of vibration on the holesaw and it took ages to get it free later.

But they were fitted ok, and a blank piece of wood was cut to fill the old hole space, after the holes were painted. The whole was then liberally sealed to prevent water ingress. 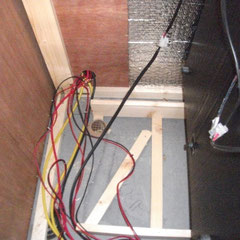 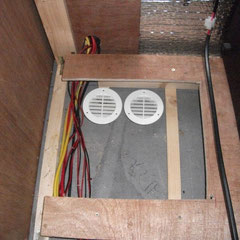 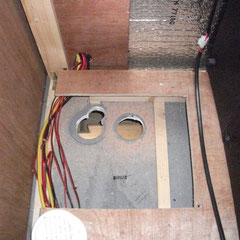 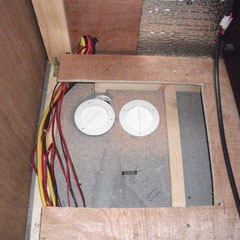 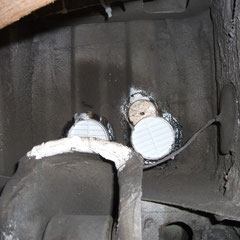 To direct the airflow, a frame was made to fit over the holes in the space beneath the fridge and to provide a duct for the cables.

The exhaust fan was screwed directly to the vent and sucks air from the van directly outside. The other fan was placed vertically further inside the frame to avoid picking up dampness directly from outside when sucking air in. Both were wired up to run when the fridge fan ran. 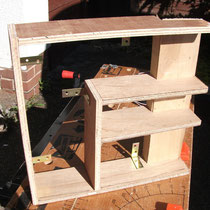 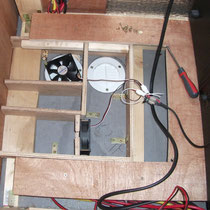 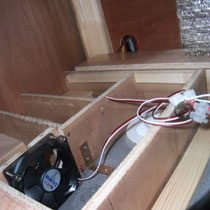 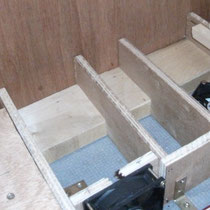 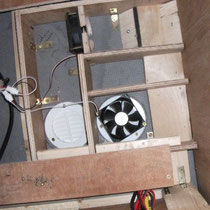 A thin ply cowl was made to fit over the rear of the fridge and contain the airflow around the fins, and screwed into position on the sides of the fridge. 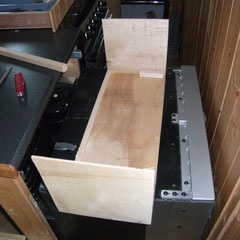 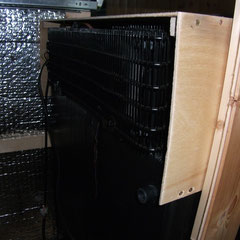 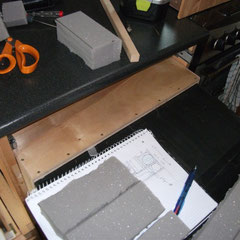 To direct air from the fans below, ducts were made from foam rubber which sealed against the rear of the fridge when it was back in position. The second picture show the frame containing the fans with its cover on.

The end result is that air is sucked into the duct from beneath the van, up the rear of the fridge and onto the fins where the original fan is mounted. Air then passes over the fins and compressor and down the other duct, being sucked and blown out of the floor of the van again. An extention to the exhaust vent underneath the van means that the two air flows don't mix and even when the fans aren't running, there is a steady air flow if the outside air is moving. 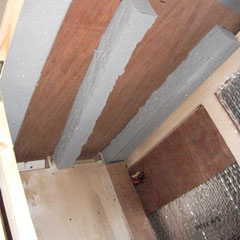 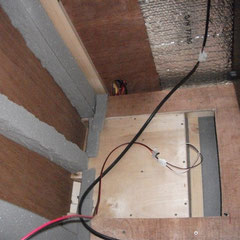 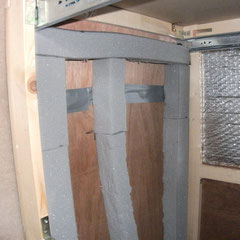