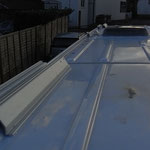 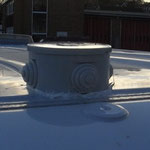 Our first day of work on the van. Started out using it as a van again and emptied the garage of rubbish which was getting in the way. Also took the bulkhead, minus hand hold, to the tip. Inspected paintwork which was covered in rust marks, we think caused by the iron filings from the window cutting.

Got onto roof and inspected where to put the Fiamma F65 S awning brackets. We didn't have an awning yet, that was to come, but we wanted the holes in the roof done before Liz got started on the insulation. Drilled out the plastic inserts in the roof after looking up the awning installation instructions, bit awkward not having an awning to check the fitting measurements. Sikaflexed the roof, then stuck and bolted down the awning fittings. Took out the large round plastic insert at the rear and Sikaflexed a cable turret to the roof over the hole. Will think about screwing it down later but really ran out of time. Also left it intact in case it decides to leak water.

Found a large rust patch on the roof caused by damage from inside, inspected the rest of the van for rust and found a few small areas. Also found that the clips used to hold the plastic side trim panels were leaking and had gone rusting in one or two places. Used Hammerite Kurust on everywhere we found.

Liz washed the van for the first time to clean up the motorway dirt and remove as many rust marks as she could. Then started with sealant on all the trim clips to seal them up, some had already been done by someone previously. Then used white Hammerite on all the Kurust treated parts, especially all the small areas which had been worn due to the ply lining and it's screws.

Now I just hope it rains loads this next week as that will test out how waterproof the fittings are. Liz is taking the van to have the rear brake pads seen to as they appear to have not been done and the worn brake indicator keeps coming on.