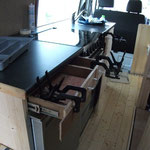 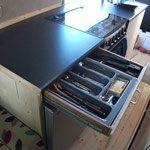 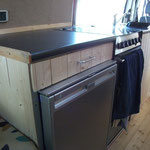 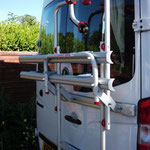 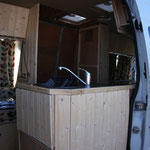 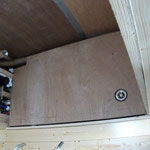 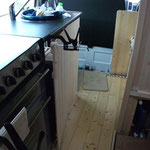 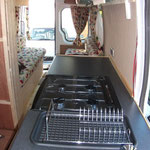 The kitchen drawer had just been a plywood box on runners, so Liz rebuilt it with partitions and a matching pine front. It still didn't have a locking mechanism, the runners had some friction, but for two years we ran the van with a bungee over the drawer to keep it shut on corners.

Under the drawer was the fridge using the standard mounting frame, which stood out a bit to much in use and meant that the fridge door didn't open far enough a lot of the time.

We fitted a cycle rack, more pics elsewhere, but only after a bit of fun getting the right mounting backets which are shaped to fit individual van models.

Finished off the end over the gas locker with a cupboard door, but you can see in the picture the mismatch on the end cladding, to be fixed one day.

The shower wasn't going to be finished, so the floor was put down as extra storage space. This was a mistake, but more on that later.

Side door on the kitchen cupboard and final finishing touches, such as the small dish rack from Lakeland.