This is just a piece about the framework that everything fitted into. There really isn't that much to say that the pictures don't explain in themselves, but it's a guide as to how it was done, and changed.

This is the basic fridge frame box. It serves several functions.

1. It's the frame into which the fridge will slide and be secured to.

2. It's part of the support for the worktop

3. It provides addition support for the rear edge of the seat/bed

In addition it also gains a bit of support from the seat/bed frame itself to prevent movement. The fridge is a Waeco CR110 and the fitting manual gave all the essential measurements. The next section, Kitchen - fridge, gives a few more details about this fridge and its operation.

A shelf was placed in the base of the frame on which the fridge stands. The walking floor height was to be about 70mm higher than the van floor so to ensure the fridge opened at the correct height, it had to be raised. The shelf was also there to ensure an adequate flow of air, but this didn't work out so well, further details in the fridge section, and to allow wires to be easily run front to back.

Note the difference between the layout on the floor 'kitchen' and the actual fitting, caused by the slope on the van walls.

An important part of fitting the fridge is ensuring that the frame is fixed to the wall and to the floor. To keep weight down, only lightweight wood was used, but the finished install has to be secure in a moving vehicle. The fridge itself is secured to a metal fitting frame which is then fixed to the wooden frame, making the complete install very rigid. This also provides important support to the rest of the worktop which was fitted later. In the end I replaced the Waeco frame with one made by a local blacksmith which was loads cheaper. 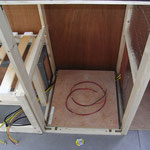 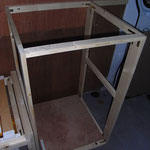 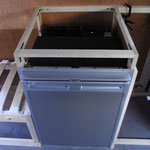 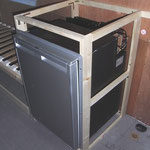 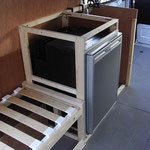 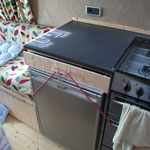 The picture gallery above shows a few extra views of the frame and the fridge in it, along with a final fitted picture. I'm sure I say it elsewhere, but in the last picture is a bungee cord through the kitchen drawer handle. The runners for the drawer had a 'lock' position but first day on the road we realised it wasn't going to work and we needed a proper lock, the drawer flying in and out as we went round corners.

The next pictures show the frame built for the cooker. 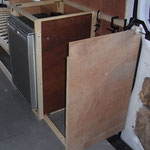 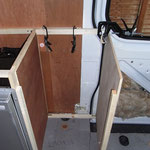 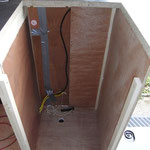 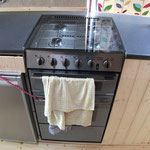 The cooker housing was more open. A 4mm plywood panel was fitted to the fridge frame, to which insulation was added, and the other side was made of a single sheet of 12mm ply.

Originally it was spaced with lengths of timber, but later a floor of 12mm ply was fitted to form a new floor for a pots and pans cupboard.

The hole in the floor is a gas drop-out to provide a route for gas to escape should there be a leak in the connection to the cooker when in use.

The rear of the housing is enclosed to prevent leaks and drafts behind the oven part. Two timber battens are fitted to the front edge of the fridge frame and the ply upright to provide fixing for the front of the cooker, also adding additional rigidity to the ply.

The cooker itself is attached via screws through the front and also inside the hob area into the worktop, which is important to make the whole kitchen secure and fixed to the van.

The amount of worktop space in the kitchen/galley area of motorhomes and caravans is so often pitiful, and yet at sometime or other, if the van is going to be regularly used (we're in it regularly 3 months of the year), then this was going to be a heavily used area. So, in the design had to be adequate working area, next to the hob, and within easy reach of the sink. The sink had to have somewhere to stand both dirty and washed dishes etc.

Looked at a variety of ways of building this, but we reverted instead to the now traditional kitchen worktop from B&Q (could have been from anywhere), 28mm thick. It was heavy, but when cut down to size with holes for sink and hob in it, wasn't to much trouble, already had a rolled front edge and we could buy side edging if we wanted. 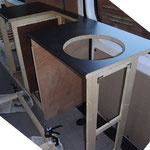 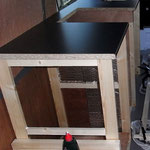 The worktop was fixed to the van wall and framework with brackets and screws, and completed a rigid frame. The end was supported on another wooden frame initially as the exact details for the gas bottle location hadn't been finalised, the decision being between facing the gas locker door towards the front of the van or towards the side door. Both had advantages, towards the front meant we could have access to the locker to swap bottles and turn the gas on and off without leaving the van, facing the side meant taking bottles in and out and checking them was easier. We went for the front facing as accessing the bottles to turn off and on was the most common action, and swapping a gas bottle in the pouring rain wasn't attractive. Automatic gas switches were an option, but a complication we didn't want. 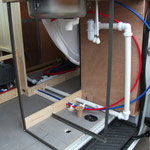 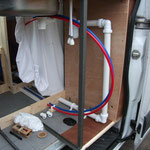 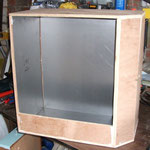 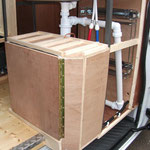 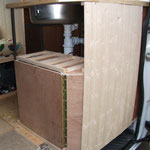 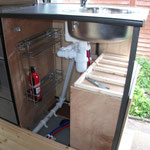 The wooden frame was replaced with angle iron, spaced to accomodate the gas locker, which when placed into position, provided additonal support and rigidity. The gas locker is for two 6kg propane bottles and shaped to remove the sharp corner when climbing in and out of the van.

The wooden bars on the top of the gas locker are there to hold tins and jars steady when this part becomes a cupboard.

The last two pictures above show some cladding having being added to the outside and a view of inside the under sink cupboard, with slide-out shelves. A floor was fitted in here to cover the pipes.

Finally a picture of the sink bowl dropped into place, still needed a tap fitting at this stage but it felt good to have it there and a long view of the completed worktop with everything fitted. 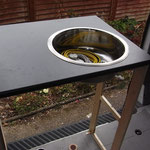 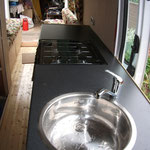