This was just a little project to add a bit of power to our cabin and workshop. Both buildings have mains electricity installed for lighting and sockets, but this is connected to the main house by a detachable cable on a separate RCD circuit. The normal situation is to have these buildings disconnected from the mains completely which if you just a five minute job to do late at night can be irritating. Hence the installation of 12V batteries, inverters and solar panels.

The bottom line to this was that we planned to buy new batteries for our motorhome, and would recycle the old ones into the role until they were dead. We also had two solar panels from a previous upgrade on the van as well, so we were well on the way to doing this without buying too much.

So that's the circuit for the solar power. I haven't shown 12V sockets and USB converters on here as I haven't fitted them yet but they will hang off the fuse box at the top.

There were actually two small projects, one to put solar in the cabin, and one to put it into my workshop. The pictures of each are below, the workshop has the larger inverter. 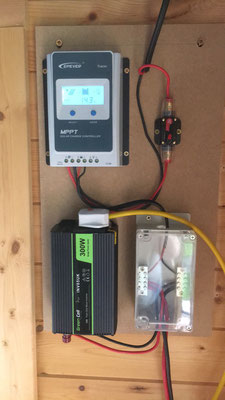 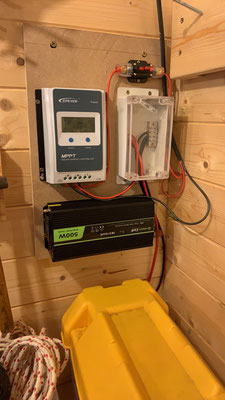 In both cases there is a single 110Ah battery with the breaker attached as close as possible to the positive terminal inside the battery box. These are both well ventilated places so no gas problems.

Both buildings had felt tiled rooves which I didn't want to puncture with solar panel fixings and neither would accept any sort of gluing reliably, so I built a frame from aluminium angle which hooks across the roof and attaches under the eaves.

The panel itself has been joined to the aluminium angle using self tapping bolts through the frame of the panels. 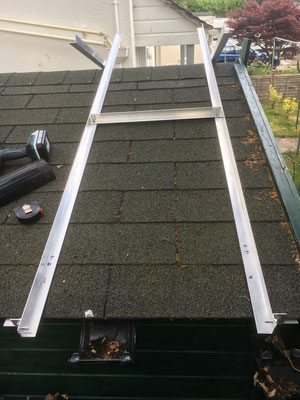 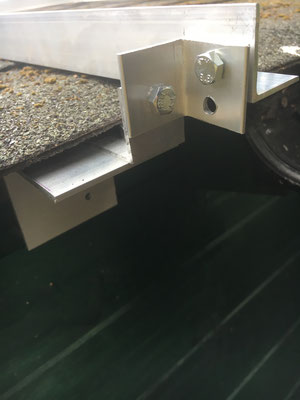 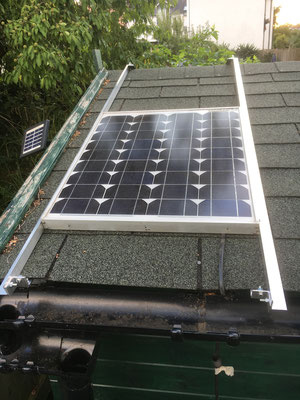 Update. These were installed during July 2018 and the system is still running ok.