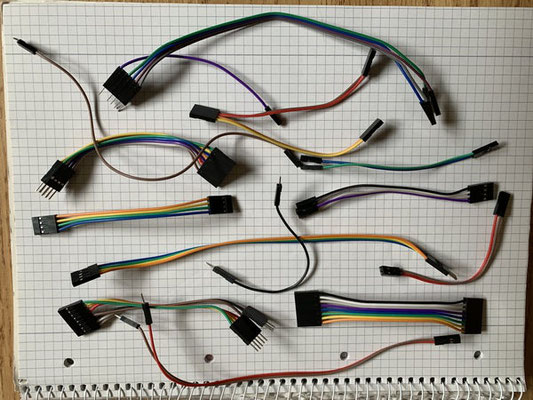 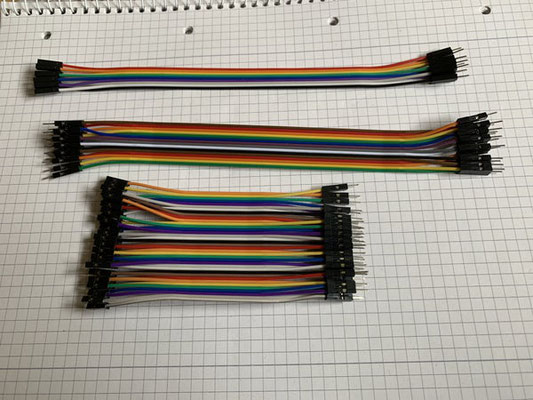 This isn't about getting out the crimping pliers and studiously putting connectors on carefully pared wires, just a quick and simple method to come up with useful cables for use in a wide variety of electronics projects.

The pictures show some of the cables I've made.

A selection of dupont connector housings, either single or dual in line

A fine pointed tool with a tip less than 1mm across, a small slot head watch makers screwdriver is good 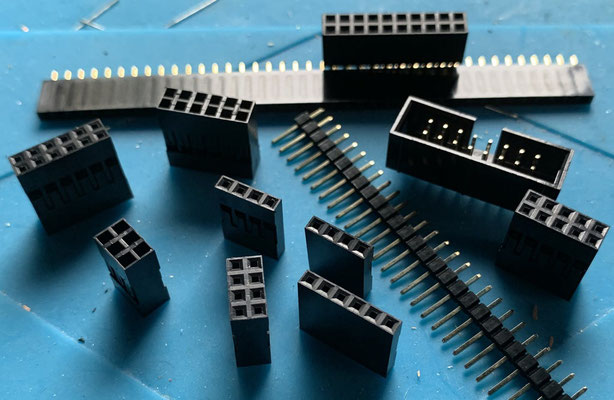 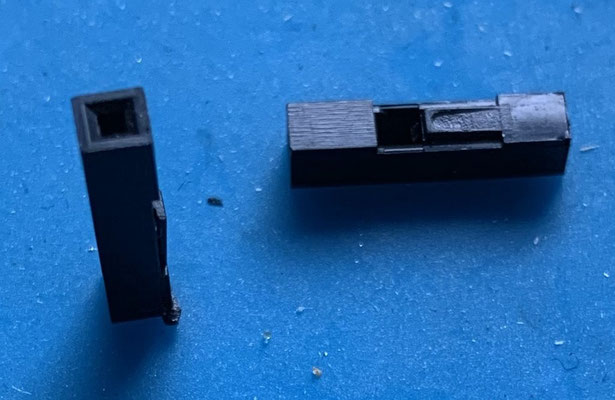 The pictures are just to show what the connector housings look like and how they 'work' as they are very simple.

The housing is a rectangular plastic tube with a wide square end and a shaped round end. As supplied on basic cables they are a single tube, but are also sold as a multiway housing, with multiple tubes of the same shape in a single plastic piece.

Halfway along the tube is a slot with a moulded plastic tongue which dips into the tube slightly.

When a metal connector is inserted into the tube through the square end, it is notch shaped so that when it passes the plastic tongue it pushes it out of the way, but once past, the tongue springs back (with a small clicking sound if you can hear it) and locks the metal connector in place.

To remove the metal connector from the housing, a small edged tool must be used to lift the tongue up away from the metal and pull the connector out. This isn't difficult but care must be taken to do this gently if the connector housing is to be reused and not broken.

There are many ways in which you could insert a connector into a housing but the way which works as described is with the open side of the connector crimp facing the plastic tongue. After a few tries this becomes very obvious as its the easiest way of inserting a connector, but a bit of trial and error and practise gets it perfect most of the time.

The pictures show a selection of connectors. 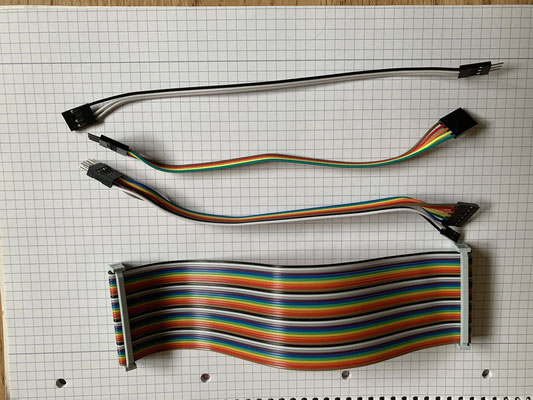 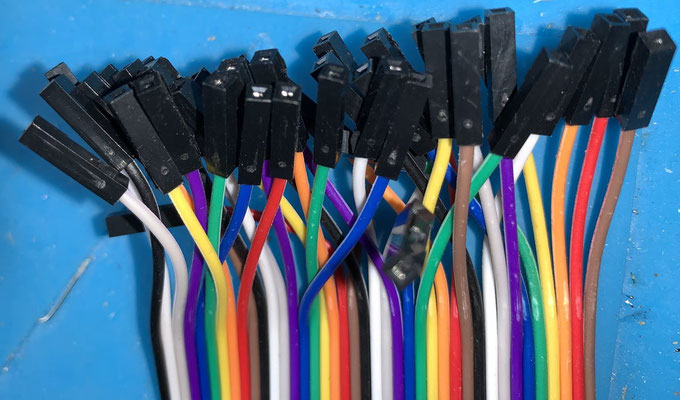 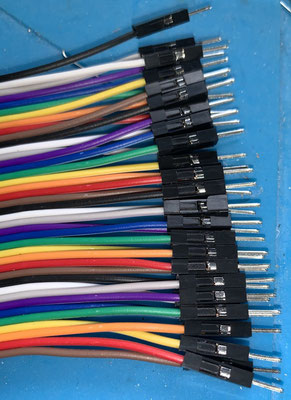 The cables don't need much introduction, but briefly they are sold as a ribbon cable terminated at both ends with a dupont connector. They come as a variety of pre-cut lengths, typically 10cm, 20cm or 30cm (occasionally longer) and have machine fitted metal connectors. The connectors on a cable are one of the three combinations, male-male, male-female or female-female.

The ribbon cable is easily separated into the required number of conductors by pulling it apart, and if multicoloured can make connection tracing much easier. 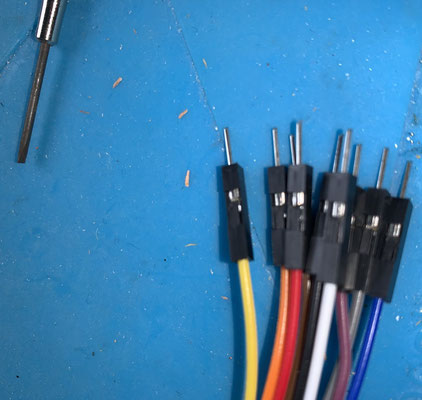 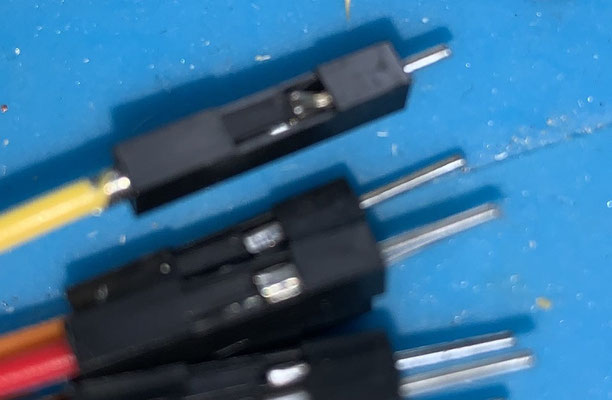 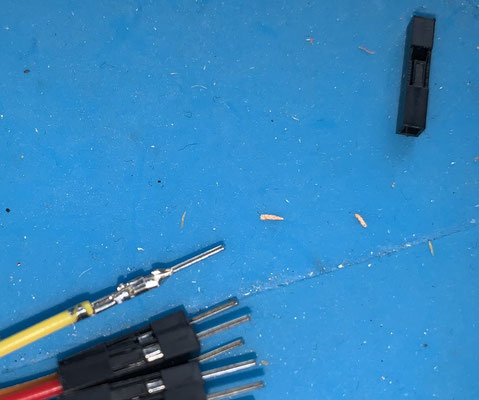 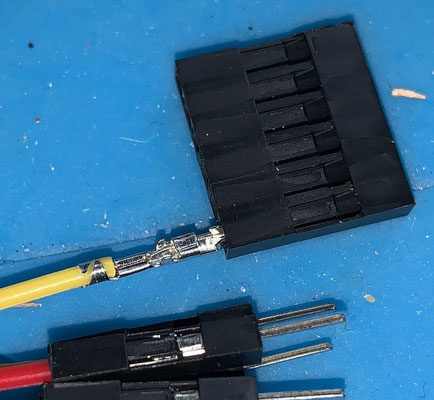 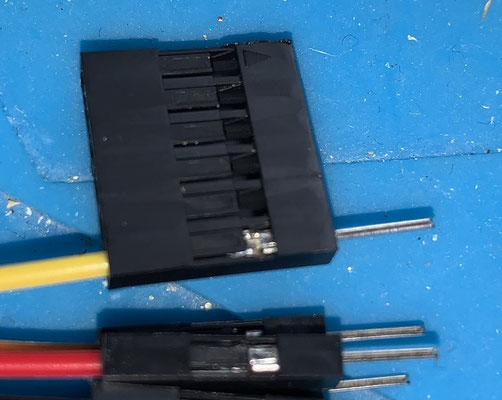 When you have a project which would benefit from a multiway cable, to make the cable, follow these steps.

1. Determine what connections are required on one end which will benefit from the multiway connection. Having blank or empty connections is ok.

2. Will these require male of female connectors. It is possible to mix them but can be awkward on a circuit board, this is the way to make keyed connector though where it can only be plugged together one way.

3. Decide on the connectors required on the other end of the wires. These may also be in multiway housings, may be singles or a different style of connector (male/female) from the first end or the other connectors at this end.

4. Select from the ribbon cables you have, the number of each type of wire you need. It's usually easier if they are contiguous wires and not separated, but not essential. Also consider the length, if they are better at different lengths then chose the appropriate length, the wires in the housing can be different lengths, it doesn't affect the consolidation.

5. Remove all the single housings from the ends of the wires to be connected to the first multiway housing(s)

6. In the logical sequence for your project, insert these ends into the first multiway housing(s)

7. Remove the single housings from the ends of the wires on the second end, but only the ones which will be going into a multiway housing, no need if they will be single anyway.

8. In the logical sequence for your project, insert the connectors into the second end multiway connectors.

Some of these may seem to be simple cables, but obtaining them off the shelf isn't always that easy, but making them was.