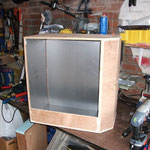 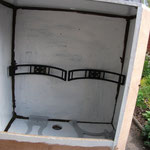 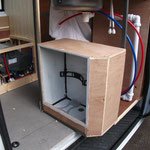 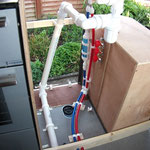 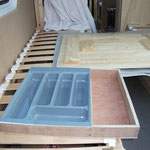 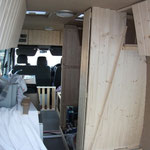 Busy time with Liz doing lockers and wardrobe door, John getting on with the water and gas.

Water was put together ok, had to modify the gas locker slightly to get the kitchen sink trap to fit in the end. Things didn't go so well with the pipes feeding the water heater as they leaked. Couldn't get them water tight, checked and had a size mismatch on the pipe. Started the gas install, fitted regulators and manifold, but hit problems with bending the pipe, mainly by collapsing it or trying to work in awkward places and crushing it with the pipe bender. Eventually gave up trying to do it with single runs of pipe and decided to use joints, which I'm not happy with due to the leak potential, but don't have much choice. Also found that the oven/hob needs a connector which was not supplied so will have to wait for that. Wired up the control panels and fitted the heater control after adjusting the cutout and fitting the temperature sensors.

Liz put up the locker doors which started to make the van look finished, even if there is a misalignment, but will straighten this out later in the year as a winter task. Finally, Liz made a draw for above the fridge.