With caravans we always had an external water carrier which we filled on arrival at a site, and then regularly went back to refill, usually once a day, and just a bit more if we started having showers in the van. As we intended to just 'pull-up-and-use', the van needed to be able to carry some water, but how much? This came down to a trade off on what fresh water tanks were readily available, what we felt we could afford, and how much space we had to put one in the van.

We settled on a 100l tank, which was roughly a cube, and this fitted neatly under the seat we had planned at the front of the van without much wasted space. Any bigger and it wouldn't have fitted, any smaller and there would have been more space unused around it, and 100l makes translating a 100% full figure into litres really easy!

Deciding on the tank then led to it's fittings. Putting the tank at the front of the van under the side seat meant we needed to have a filler close by. We could have run a long tube but that would have been a real pain, so we decided on a short 40mm tube to a filler in the van side wall next to the tank. On paper this was ok, but once we started to install then we had minor issues routing it between the van wall bracing. It went in ok, but was tight. As we could have had the filler pipe anywhere, and we just asked for it in the center side of the tank, that was something we could have usefully looked into first and put somewhere else. Similarly where we would cut a hole in the van side.

The tank would need an outlet, easy decision to put it at the bottom, similarly the overflow pipe. Again, these could have been anywhere we wanted, but by deciding where to put them first, and then working the pipes round that meant we created more work for ourselves, planning where the pipes would best go first would have been helpful and avoided the maze we created. Having looked at the default fitting sizes around, what sort of water flow we wanted, we settled on standard 15mm pipes and fittings, not necessarily the most straightforward choice though as we found out. 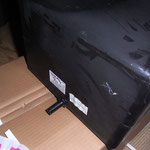 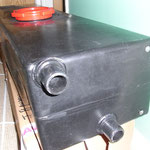 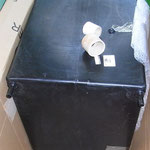 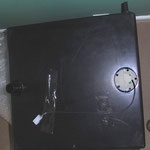 The waste water tank was just for grey water so no special sanitary 'no touch' considerations but needed to have a reasonable drop. The drop from the sinks weren't a problem, but the shower trap was at floor height, so a tank under the van was compulsary. Before we bought the van we'd taken lots of pictures underneath and so had found an easy place to fit a long one and as the fresh water tank makers had a 70l tank which fitted perfectly, the decision was made. Fittings weren't to much of a problem either, but then there wasn't much to get in the way, but it did mean having to cut holes in the floor so could have gone badly wrong! Also got a cleaning hatch fitted (red in the pictures) for sluicing out every so often. Fittings were 40mm, so great water flow and seem to keep things clean by themselves.

The picture shows the waste tank slung underneath, supported by metal builders tape hung from u-bolts. We found one problem with the position during the first summer when we ended up in a long traffic queue. The exhaust would vent onto the end corner of the tank, causing a bit of a smell and a small amount of melting. Hence the metal plate was fitted to deflect the exhaust in future. Been fine since.

It hasn't been a problem, but we've been recommended to put a supporting base of plywood under the tank to stop it 'drooping'. Haven't done that yet, but if it does need it, then will consider adding one and updating this.