I've built lots of different hi-fi gear over the years, but I've never built a class A power amplifier. I hadn't planned to until I came into possession of a pair of 1.1C/W crocodile teeth heatsinks that I thought, why not. It wouldn't have been the biggest job in the world to start from scratch but I decided to keep it simple and buy a internet kit for JL Hood's original Class A amplifier and modify it.

This was a design published at the end of the 1960's and is really just a back to first principles design using 4-5 transistors and a simple power supply. Of course the reason that these amplifiers aren't common is that they typically run at 20% efficiency so my 10W+10W amplifier actually uses around 100W of power continuously, and consequently gets hot, so the big heatsinks have something to do, and even then they run at about 60C.

The following pdf is an accumulation of JLH's writing on the subject.

This was the initial trial layout, partly dictated by the size of the heatsinks being used as part of the case, and the availability of aluminium sheets. Symmetric layout, simple PSU, single central transformer, central mains socket, volume control on left, mains switch on right.

Case assembled but without holes. The aluminium was supplied with a flat finish, the brushed effect added by me, see separate website article. 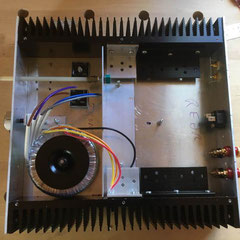 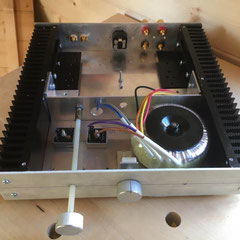 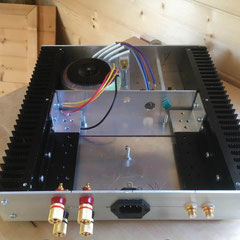 After some second thoughts, the actual layout was changed to move the transformer away from the volume control as far as possible, even though it was mounted on a dividing metal wall. The mains socket had to stay central due to space constraints, but the inputs were moved to one side to stay as far away from the mains cable to the transformer which was run under the output transistors for the RHS. The volume control is an ALPS model.

I'd bought a kit of bits thinking to upgrade components as required but the actual kit supplied had a design which had been modified from the original, so it was updated to accommodate the original transistor layout with some cuts to the pcb tracks and connector wires soldered in.

Completed circuit boards, the right channel is actually the board on the left. The transistors had been uprated to the MJ15003's.

Pictures of the regulators. These are LM338K 5A regulators and were chosen to smooth the power supply and be particularly robust, but they failed very early on and I didn't replace them. They were well within specification so I can only assume they were from a poor quality source.

Components put in place, showing the LM338K regulators clumsily on one side due to changing the volume control to a Bourne model and not leaving enough space.

Another case layout change, the mains switch moved to the left hand side, the volume control to the centre. This enabled the power regulators to fit evenly on either side on the main heatsinks and the PSU smoothing capacitors to sit on a single PCB without the volume control shaft running between them.  In the event, the proximity of the transformer to the volume control wasn't a problem and the metal shield between them worked ok.

This is a picture of the mares nest of initial wiring for testing. The first configuration test had failed when one of the LM338K regulators blew at about 2A and was obviously faulty. I replaced them with new LM337 regulators, and these were very successful, though they look a bit odd.

Looks a lot better with the lid on though I know what is inside and a rewiring and insulation task lies ahead. Also some sort of additional cooling. This amplifier does get hot and will sit at 60 degrees on a normal day, much more if its a hot summers day. I've bought some perforated steel sheet to experiment with additional ventilation to the case and may end up mounting some fans underneath to provide additional airflow.

The whole point of this is to play music transparently and all I can really say about how it 'sounds' is that it doesn't take prisoners. Using vinyl on the Rega through the battery preamp sounds great and difficult to ignore. The DVD player, a cheap player donated to me for experiments, sounds only just bearable, and music from an iPhone is just rubbish and only suitable for background music when you aren't listening. Next music project will be a high quality digital sound source, though that appears to be 90% computer programming!