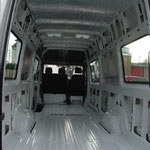 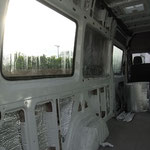 Not just one day, but several...

Liz started to cut-out the insulation panels for the first layer of insulation, which went fine, but the Sikaflex was a real pain to try to apply. I was working in Norwich and intended to return to help out with a bit more muscle. On the first attempt on a Friday afternoon, I was a bit faster than Liz, but it was still painfully slow. Looked up some advice from the SMBCC website and decided to heat the Sikaflex first, we were working in Winter! First attempt was to put the tubes in hot water, which worked for a while, but then we found a better and ultimately successful solution.

The van had been cold overnight so to avoid condensation with us working in it, we put in a fan heater to blow any moisture out the back door. Lying the tubes down in front of it every time we stopped working heated the Sikaflex up enough to make it usable and made the whole task of sticking insulation to the walls that much easier.

The insulation is the bubble wrap type, two layers of aluminium foil separated by polythene 'bubbles'. This has been attached to all the walls and then all in accessible cavities have been filled with recycled plastic bottle based loft insulation which B&Q were selling for a fiver.

As we're insulating the roof, decided to take down the headlining at the front and insulate the cab area. Lots of screws, removed the cab light, to be gaffer taped back later, removed the paper shelves and sun visors, then finally unscrewed the seat belt covers to release the base of the headlining moulding. Final job was to pull down hard on the headlining retention tags in the roof and it all came free. Putting the fittings back wasn't to much of a problem until it came to the seat belts, which while assembled easily, the height adjuster had to be fitted back correctly otherwise they kept jamming, resulting in several reassemblies. Also the rubber door surround proved a nuisance levering it round the fitting each time, not the intended assembly procedure. It also highlighted just how dirty the van was, there being a tide mark round the rubber seal of bright clean plastic, against the worn and dirty parts exposed to the world. Liz did a quick wipe round but we will need some good cleaning products before we are finished! The next job was the floor preparation.

We had already lifted part of the floor before and new that it could be a wet mess so it had to be done to be sure of what was there. This time it came up easily, especially as we had covered the Velcro with newspaper, but it wasn't as big a mess as imagined. Started to use an old Dyson vacuum to clean up but it died early on, probably of old age, not the contents of the van floor. I swept up with a brush and Liz followed on with a wet cloth and we ended up with a very bright white floor. Found a few nasties hidden on the floor though, two bolts which had been inserted from below and a broken screw, job to remove them and seal the holes tomorrow. The floor covering was also a mess so removed the broken and tatty sound insulation, accompanying staples and several screws, broken and otherwise, they would only have caught on either the floor insulation or worse, us.