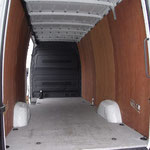 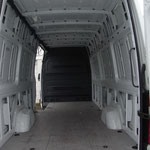 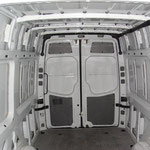 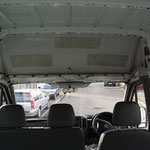 Finally have van at home to start work on.

Straight away, marked out van on the floor with where things would go. While our plans were based on the Mercedes specs, found we had just that little bit more space than expected. May revisit plans to use it up afterwards.

When bringing home the van, found that the wash water was completely gunged up with algae, as well as only containing icy water, so one of the first jobs was to clean out the wash water and and fill with water and screen wash. Had to clean out the spray nozzles as well as it was growing well in there. Much better idea was to enjoy playing with van.

But, took some pictures then removed the ply covering walls and rear doors to allow the window fitters, Vanglaze, to get at the walls. Marked up where the windows had to go and where the two roof vents would be, one over the kitchen/galley area, one in the bathroom.

Then fought the screws in the steel bulkhead, good 90 minutes work to get it out, and 30 screws or so. Ended up taking out all the top ones then bending the bulkhead down to get access to the 'hidden' screws behind the front seats. Removed the bulkhead handle to refit to the door area later. A full set of Torx heads definitely required.

Finally lifted front half of floor to check steel van floor. Was awash with water and ice. Cleaned this up and found it was also under the front floor lining. Had to also have a brief wipe around the van as condensation was everywhere.

Ended the day with the plan to take a few more pictures of van tomorrow, maybe lift some more floor, and examine the roof, especially the roof and rear camera fixings. May also get a fan heater in there to warm it up and maybe blow away some condensation.