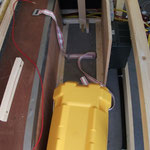 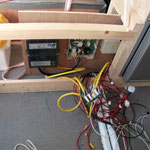 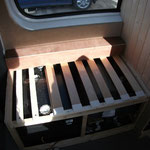 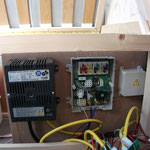 Serious amounts of effort on electrics to get them working. Previous day got all the connections made. Built small enclosures for the batteries and fitted straps. Also installed mounting board for the control unit, charger and mains junction box. Ended the day by just plugging in the connector blocks. Real problems with also wiring up the negative side as this doubled the number of cables! Won't do that again. Used only one battery, the old caravan one, to run the motorhome as wasn't sure that I could equalise both old and new yet. Also didn't connect to the Sprinter battery as couldn't find the battery isolator which was documented in the manual, realised afterwards that the connections were fused so could have just removed them!

While all this was going on, Liz was making curtains and the window cover for the sliding door.