After a lifetime working in IT, I still help out with local charities requiring assistance with their IT systems, something that's unavoidable for many organisations in our modern world. This section is partly to document what I've done with this server for my own future reference, and partly so that anyone else in the same situation can take a few shortcuts and copy what I've done.

A Dell T40 was purchased for a local charity to replace a second-hand recycled desktop PC which was being used as their database server. The database is becoming increasingly important to their operations and for providing evidence to official registration bodies. The T40 was bought at a discounted price with one disk drive and was upgraded with two SSD drives and 16GB or memory, again at a discount, and consequently without the operating system, Windows Server 2019, installed. I was expecting to have an easy job with this.

For anyone buying a T40, here are the downsides. Despite obviously being built to very high standards, Dell does not sell additional spares for this server themselves. Adding two additional disk drives means that that they dangle inside because Dell does not supply the disk mounting caddies and they appear to be unique to the machine. I've found one supplier in China, we'll see what they are like when they arrive later in the year. The preinstalled cabling is well routed and restrained, but additional cabling just ends up hanging, even Dell's manual shows a picture of the cabling installed unrestrained (though with spare disk caddies).

UPDATE: The disk caddies supplied were fine, and I'm sure that other models would probably work, it's mainly the peculiar arrangement of plastic lugs that would make it unique. The order line for the caddies read as follows:

These two items are irritating, but cable ties can get us over this. However the firmware on the T40 is not up to the standard Dell normally supplies and their current install videos are useless.  Basically it looks like a late 1990's BIOS updated for UEFI and frequently refers to itself as such. I haven't been able to get it to boot into a EFI prompt yet, happy hear about how to.  It was Version 1.0.1 and even the Dell documentation talked about V1.0.5. Access to this part of the firmware is accessed by pressing F2 repeatedly during boot up.

So, I started with an ISO image of Windows server and I haven't got the usual Dell iDRAC or a 8GB DVD blank. First hurdle is getting the two SSD drives mirrored using the inbuilt Intel VROC raid system. When the system boots the raid system will put up an initialisation screen for 5 seconds, describing the current raid setup and prompting the user to press Ctrl-I to modify. This does not work, pressing the key combination has no effect, with or without capslock or numlock on.

To enter the configuration for the RAID system on boot up, press F12 repeatedly until the alternate boot menu appears. On the menu is an option, DEVICE CONFIGURATION, which when selected invokes the RAID configuration screens, which are fairly simple to use and configuration is easy. After configuration I noticed that the initialisation screen only appears for a fraction of a second which makes me wonder if it wasn't supposed to be shown anyway and wasn't fully implemented. Haven't been able to catch a picture of it anyway!! 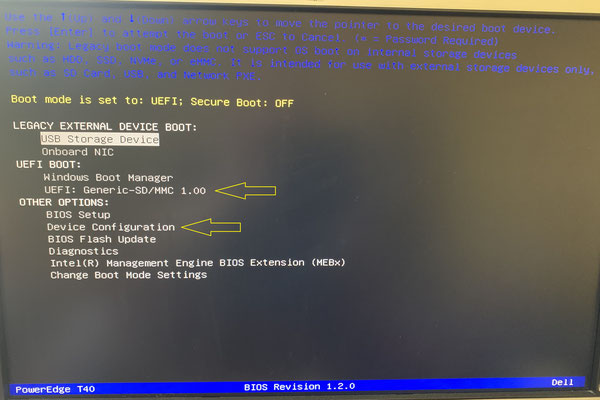 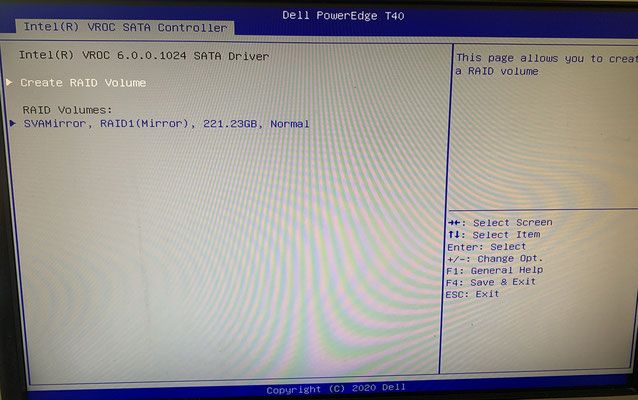 Once that hurdle was out of the way, I prepared to install the OS from USB. Apart from the lip service to UEFI that the firmware provides, there is an option to control booting from USB in the firmware which must be set.

The T40 firmware will not boot from a USB drive formatted with NTFS, so I've found anyway, but FAT32/GPT works ok. It should be a USB drive with greater than 8GB of storage, so 16GB or larger is ok. I found 8GB to look like it should but fail, (though formatted as MBR with an active boot partition may be fine, that BIOS element).

As the install image file is to big for FAT32, it has to be split, which adds an extra complication but to create the USB drive the following tasks were carried out. 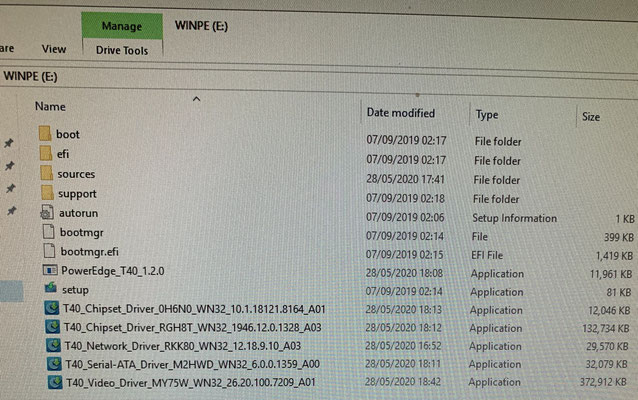 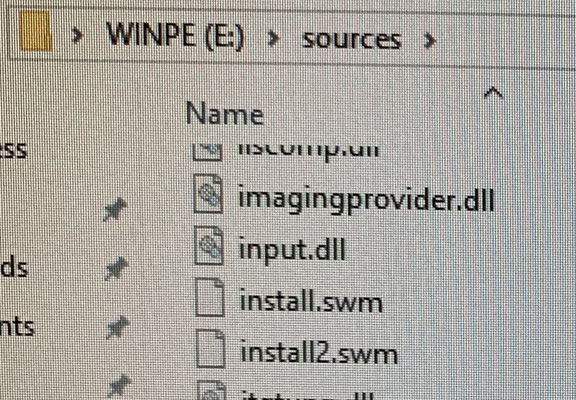 To install the OS from the USB drive, insert the drive into one of the T40's many USB sockets and boot the machine, pressing the F12 key until the alternate boot menu appears. There will now be a new option on this menu, UEFI BOOT, which when selected will boot from the USB.  Windows install will then run as normal.

For the T40 I had, there was one urgent BIOS update required and 5 driver updates required which were downloaded from the Dell T40 driver webpage. This has an inconsistent download operation and I found the most reliable operation was to right-click on the download button and open in a new tab, saving the files locally and then copying them to the USB stick. Windows did not supply any drivers for the T40 network interface so this is essential to get the machine fully working. All updates consist of running the supplied executable and restarting the machine.